Making a cardboard former for a hat

Nov 5, 2010 | 'How To' guides and tutorials on how to make and design hats and headdresses and work with millinery materials | 0 comments 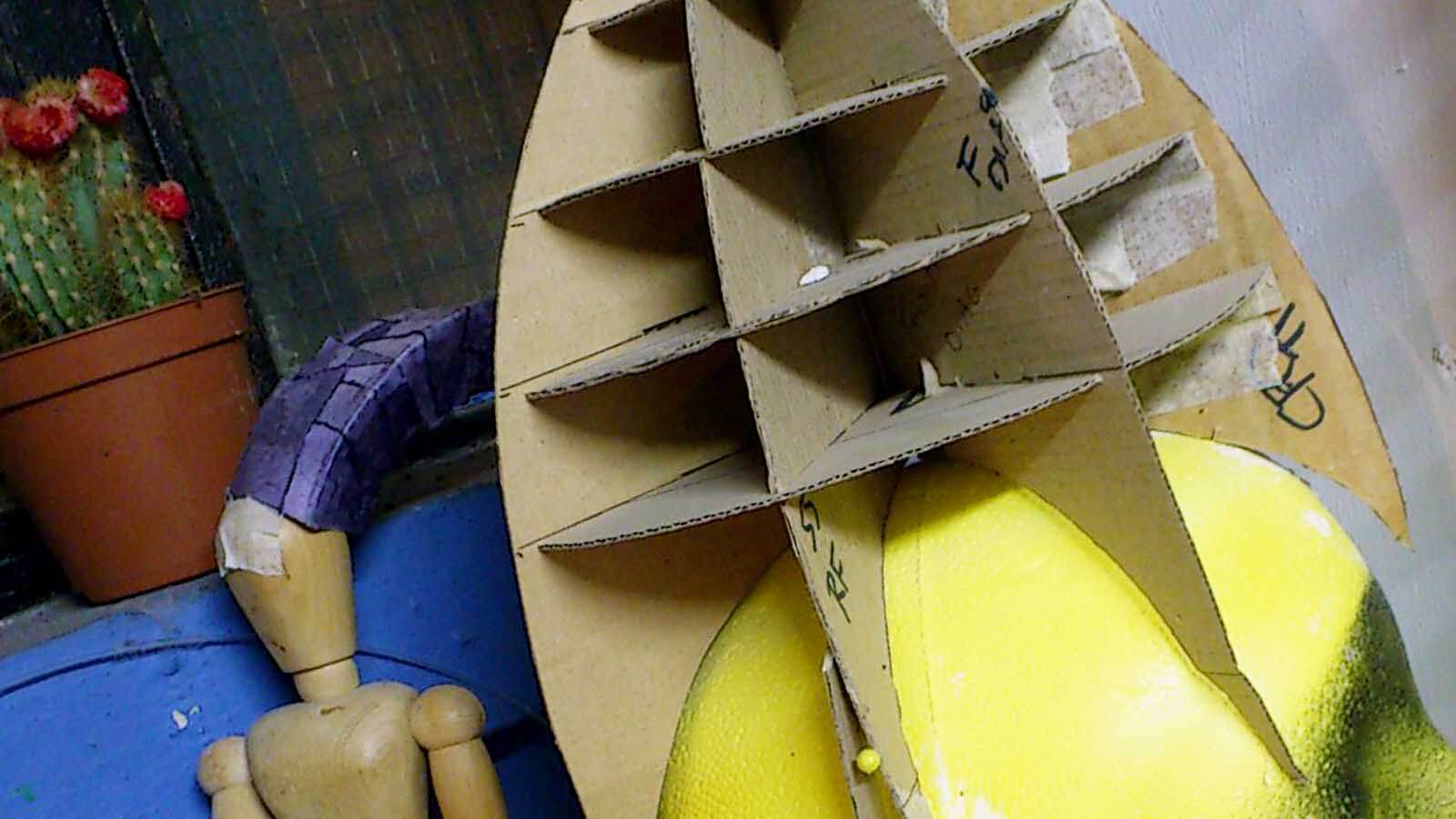 This is the method I use to create patterns for my large plastazote headpieces. See the photo at the end for an idea of the finished shape. It’s a good way of mocking up a hat (if you re working to someone else’s designs) to check that you are on the right track of what they want. 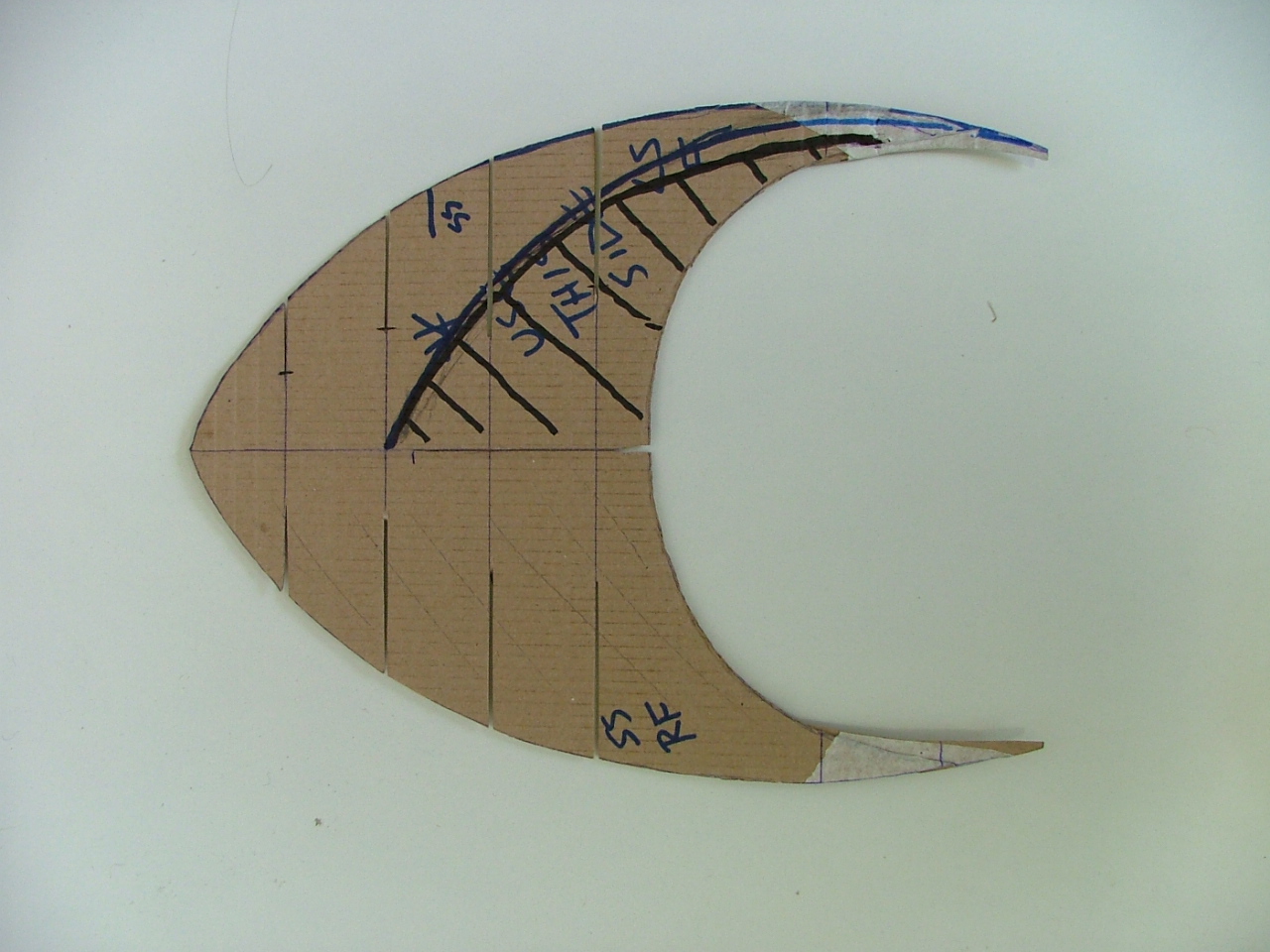 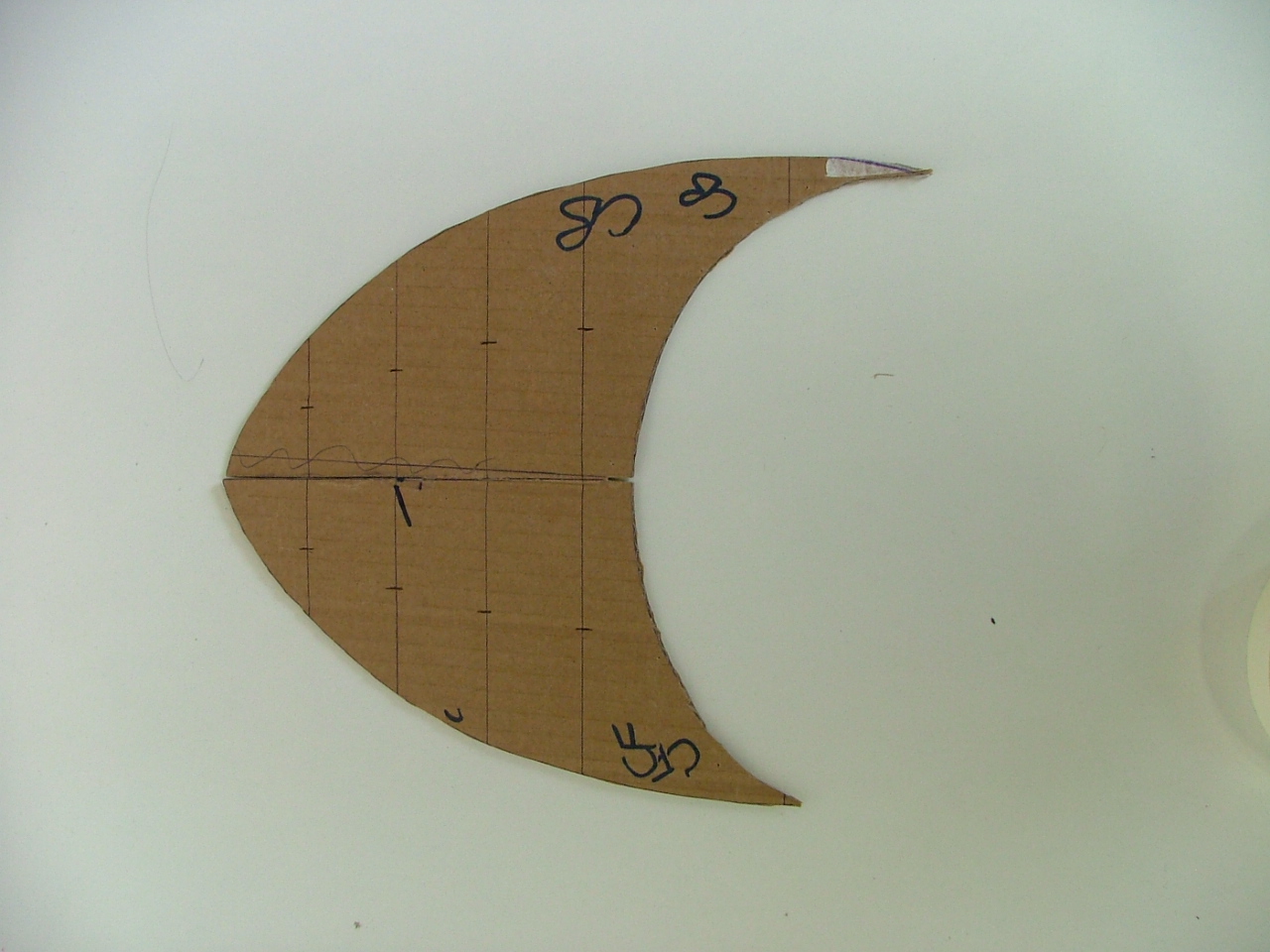 2 pieces – one that runs from top of ear to top of ear (side seam – SS) and one that runs from forehead (centre front CF) to nape of neck (centre back CB).  These are the profile view and front on view.  Get the curve for where it is going to sit on head by getting a bit of wire and bending it over your head and then tracing that line on the cardboard.

Draw a line going up at a right angle from the crown of the head.  Spend a bit of time working out where exactly that point is, as this is the centre of the cardboard former (and it is important to get the exact centre of the hat right for balance, especially if it is going to be a big piece).  Work out the profile shape and the front view shape.  If the shape is symmetrical draw one side and use that as a template for the other side, making sure they mirror each other and they re even. As they are going to join together on the vertical line you have drawn from the centre of the crown, that line should be the same length on both the profile view and the side view.

Next thing to do is work out the braces.  Don’t tape the bits of cardboard together yet (the profile and front on view pieces) as they need to have other things done to them. 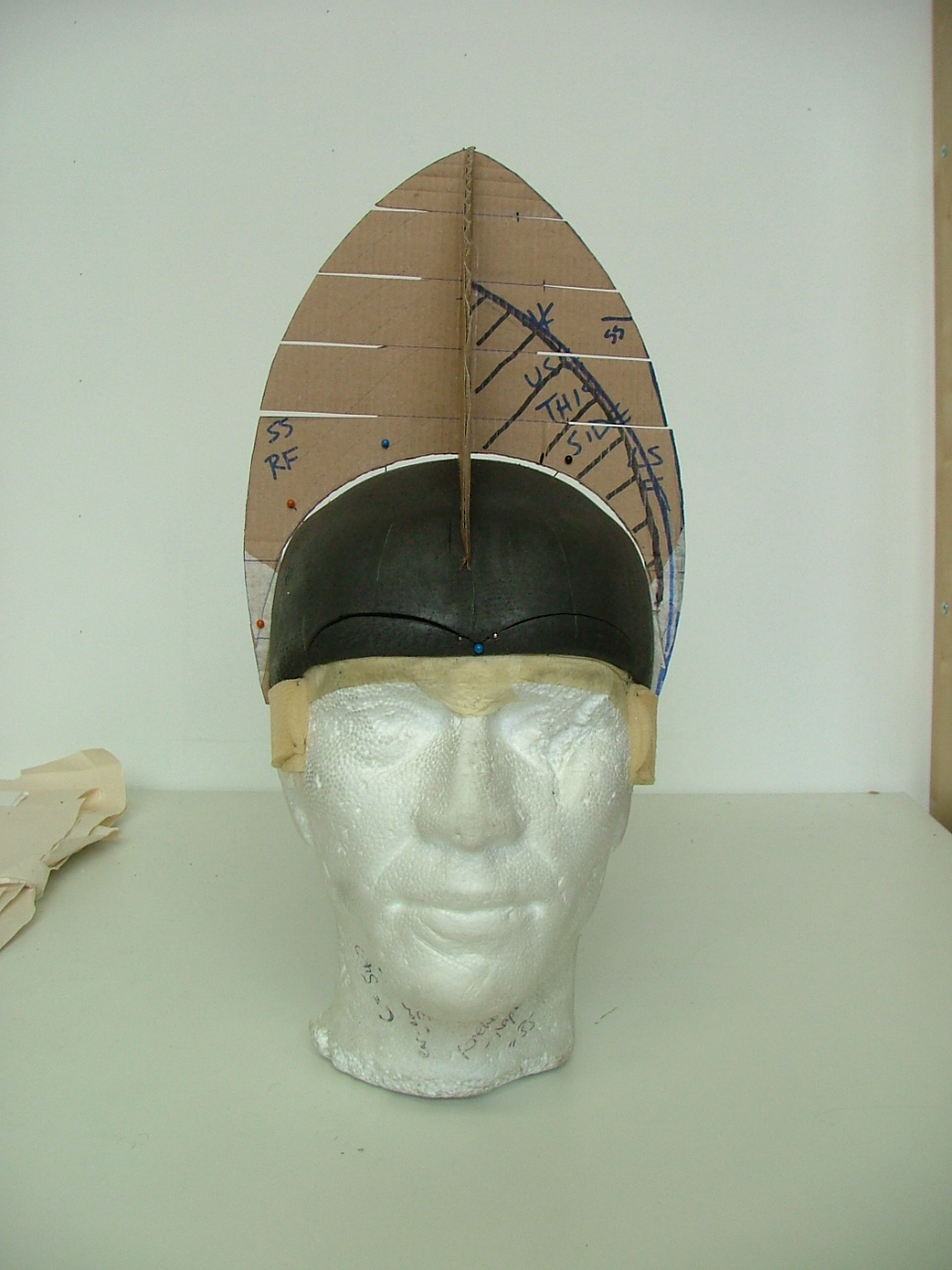 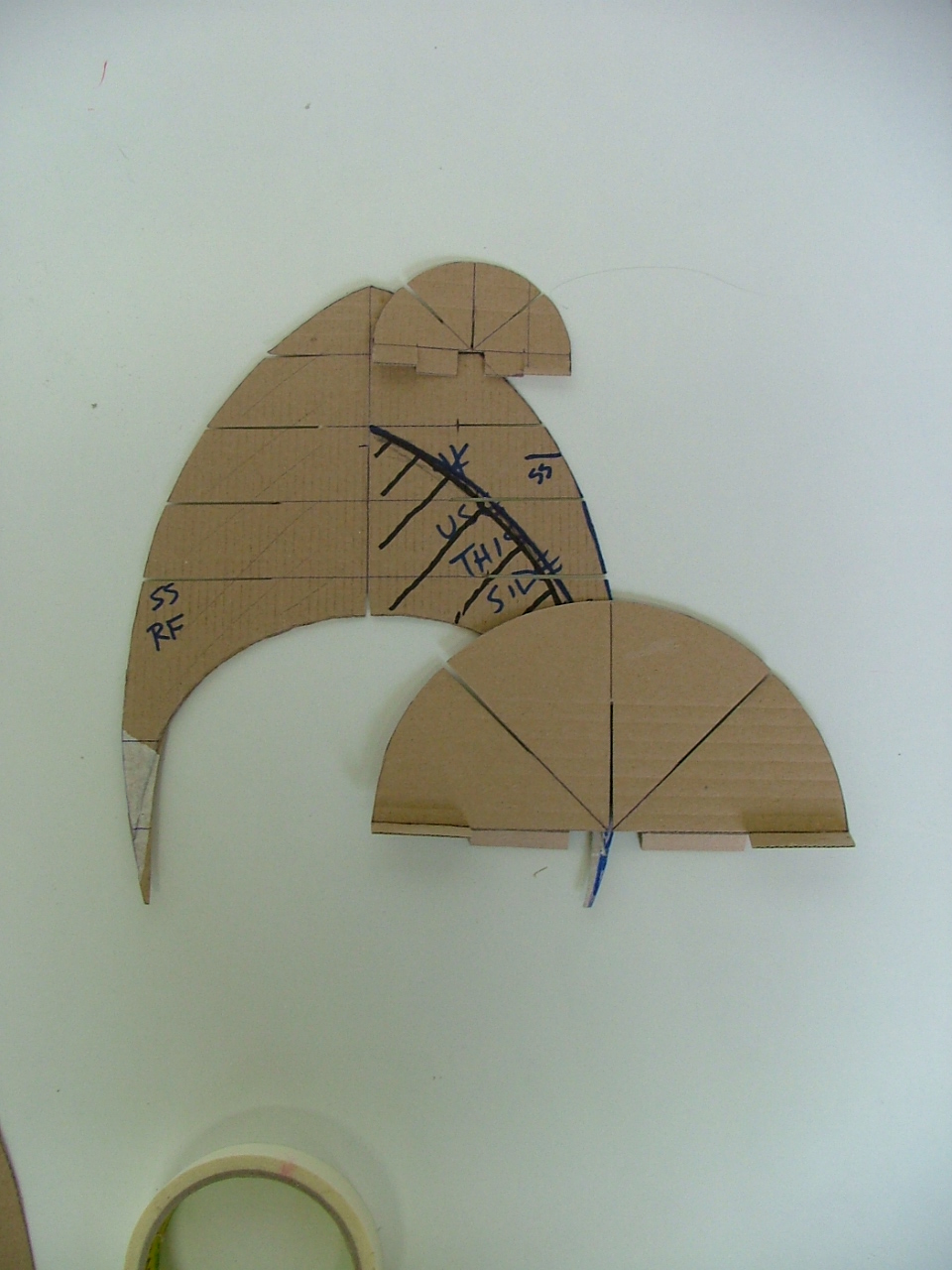 Okay, so basically this cardboard former is an easy-ish one as it is symmetrical both front to back as well as side to side.  Therefore the braces are semi circles.

First of all, go back to the cardboard profile view and side on views that you have just made.  You need to draw lines of where the braces are going to either be taped to, or where you are going to cut more slits to slot them into.  On the cardboard former in the pictures I drew parallel lines that were 3cm apart.

It is really really important that the lines that mark where the braces sit are at a right angle to the centre line.

It is also important that the brace lines come off the centre line at the same position on the front on view and the profile view.

Now draw the lines for the shape of the cardboard braces.  Draw a straight line on a new piece of card, and then a right angle coming off it.  Also draw in a 45 degree line – again really important that this line is accurate, I use a ‘pattern master’ ruler that you can mark 45 degrees with.  This all sounds really confusing, but if you look at the photo it will make sense.

It depends which view you slot the brace into as to which bit you measure for the brace shape.  In this photographed cardboard former I’ve used front on view to cut slits into, and the profile view is not cut into, but that is the side the braces are taped to.

Don’t cut them out yet, you have to add a tab at the bottom of them. 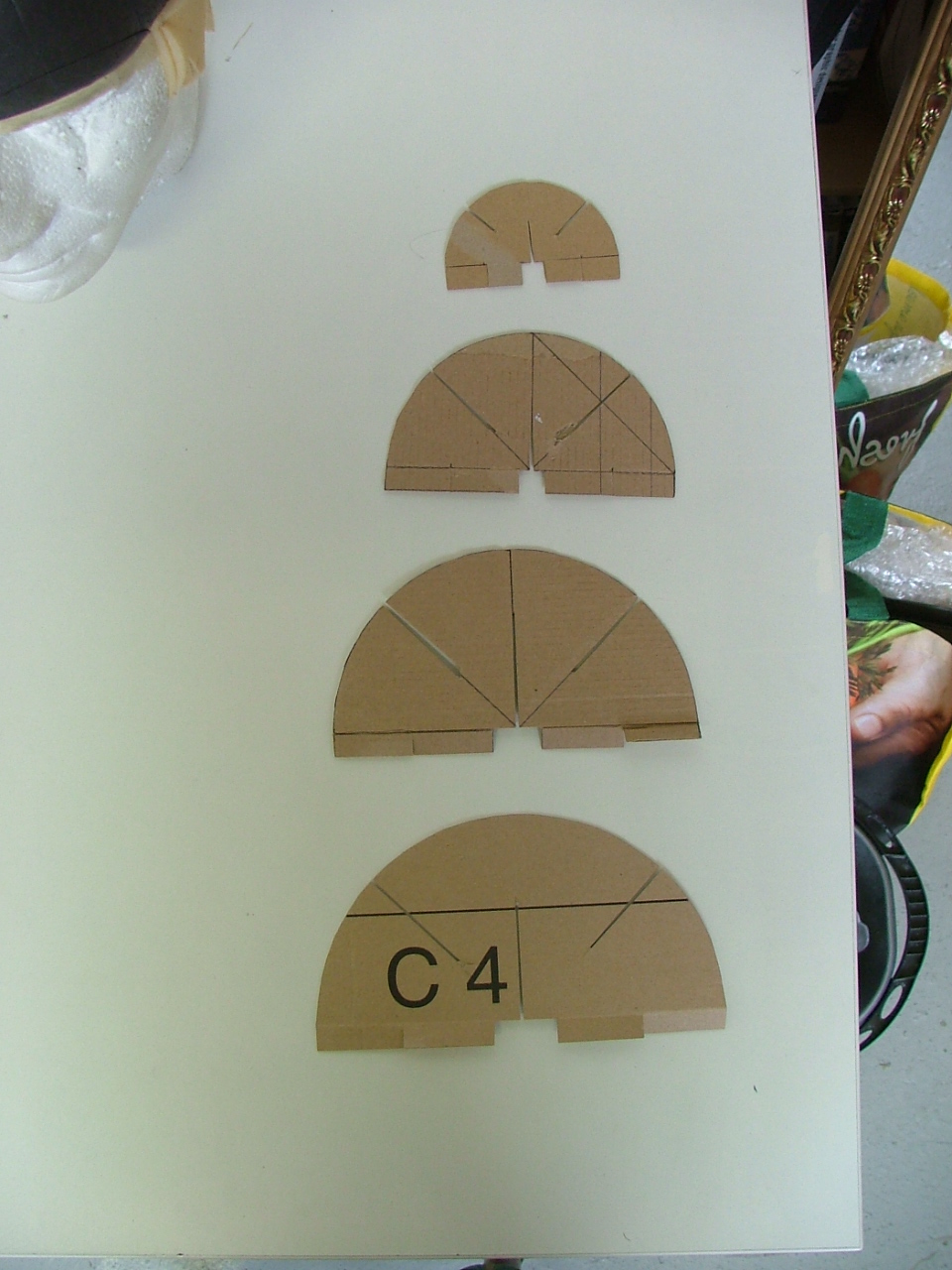 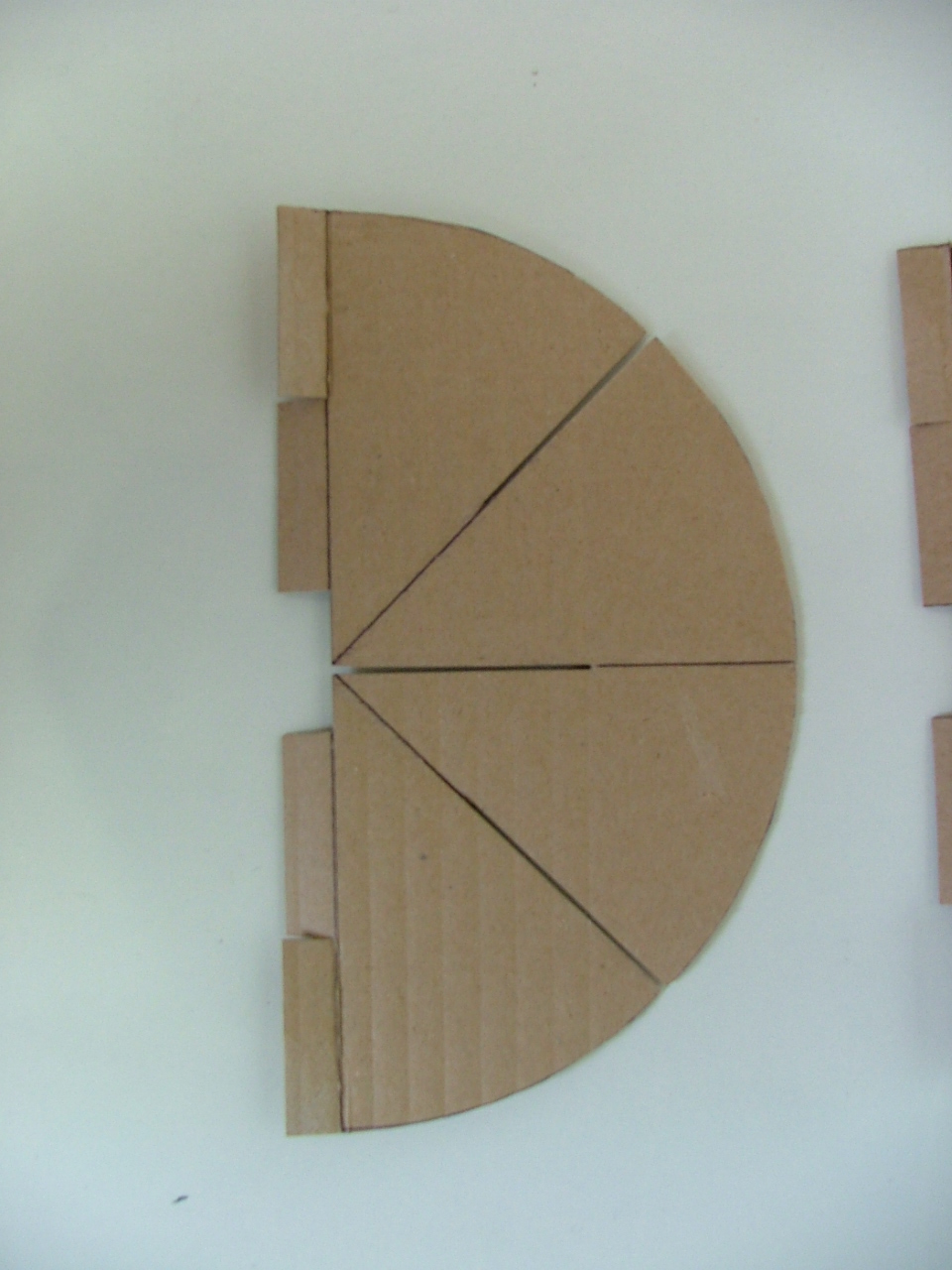 So for this former, as it is symmetrical the brace is a semi circle.

I measure from the centre line to the outside of the profile view, along the respective brace’s positioning line, and that is the radius for my compass.  Then draw the semi circle.  Then, I need to add a tab on the bottom of the brace so that I have something to tape it onto the cardboard former with (if you don’t do this you can spend ages fiddling around to try and make it stand up straight).

Add 1cm onto the bottom of the brace shape.  Completely cut away 2 cm at the centre line part of the brace, it will just get in the way when you are slotting it in.  Then cut the whole thing out and score along the line that marks the end of the tab.  Cut the tab into 4 so that 2 of them can go one side of the brace and 2 the other – this will make is stable.

It’s easier to understand what I am talking about here if you look at the photo below.

Don’t worry about cutting slits along the 45 degree line, you can do this later when it is taped into position (you can do it now if you want, but I find it starts to fry my brain trying to think about which side to cut the slot).  For now just cut  a slot along the central line of the brace (the right angle line) going from the bottom of the brace to half way up (or just beyond half way is better).

On the side that you have chosen to slot the braces into, cut slots from the outside of the cardboard shape to just beyond half way on the line that marks the brace.  Now you can start slotting them in which is really fun.  Tape each one down as you go.  The slots should be wide to accommodate the cardboard. 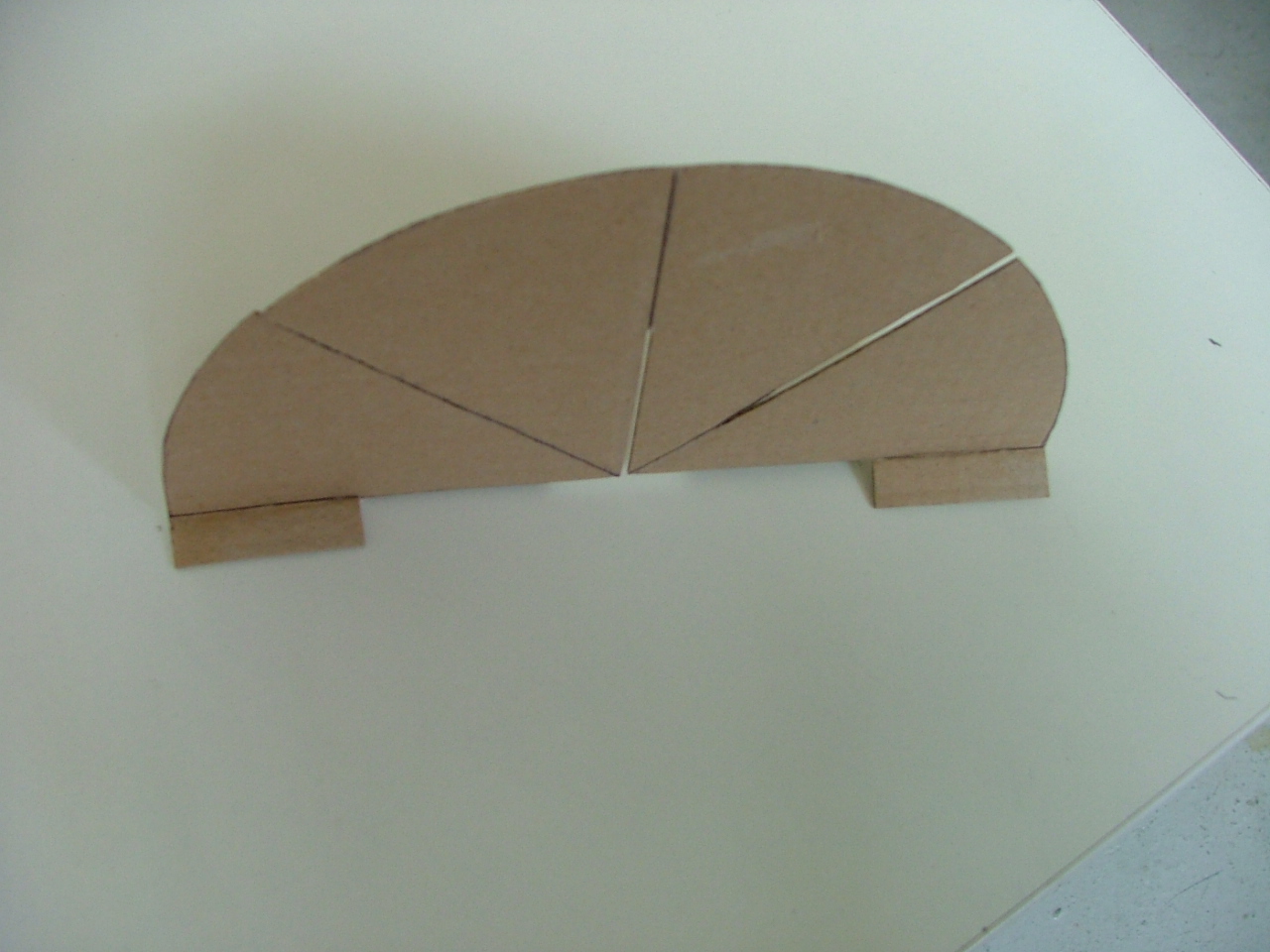 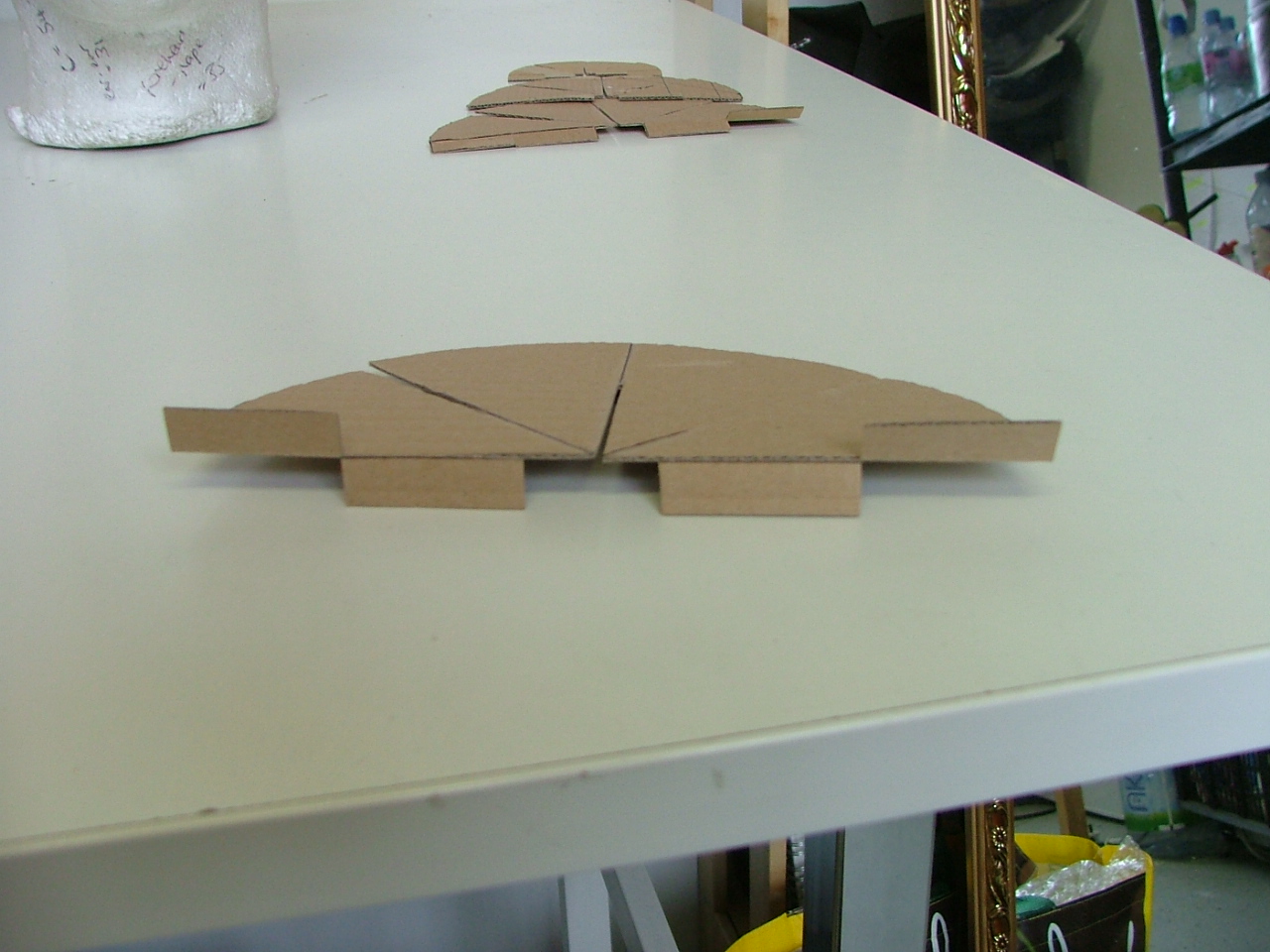 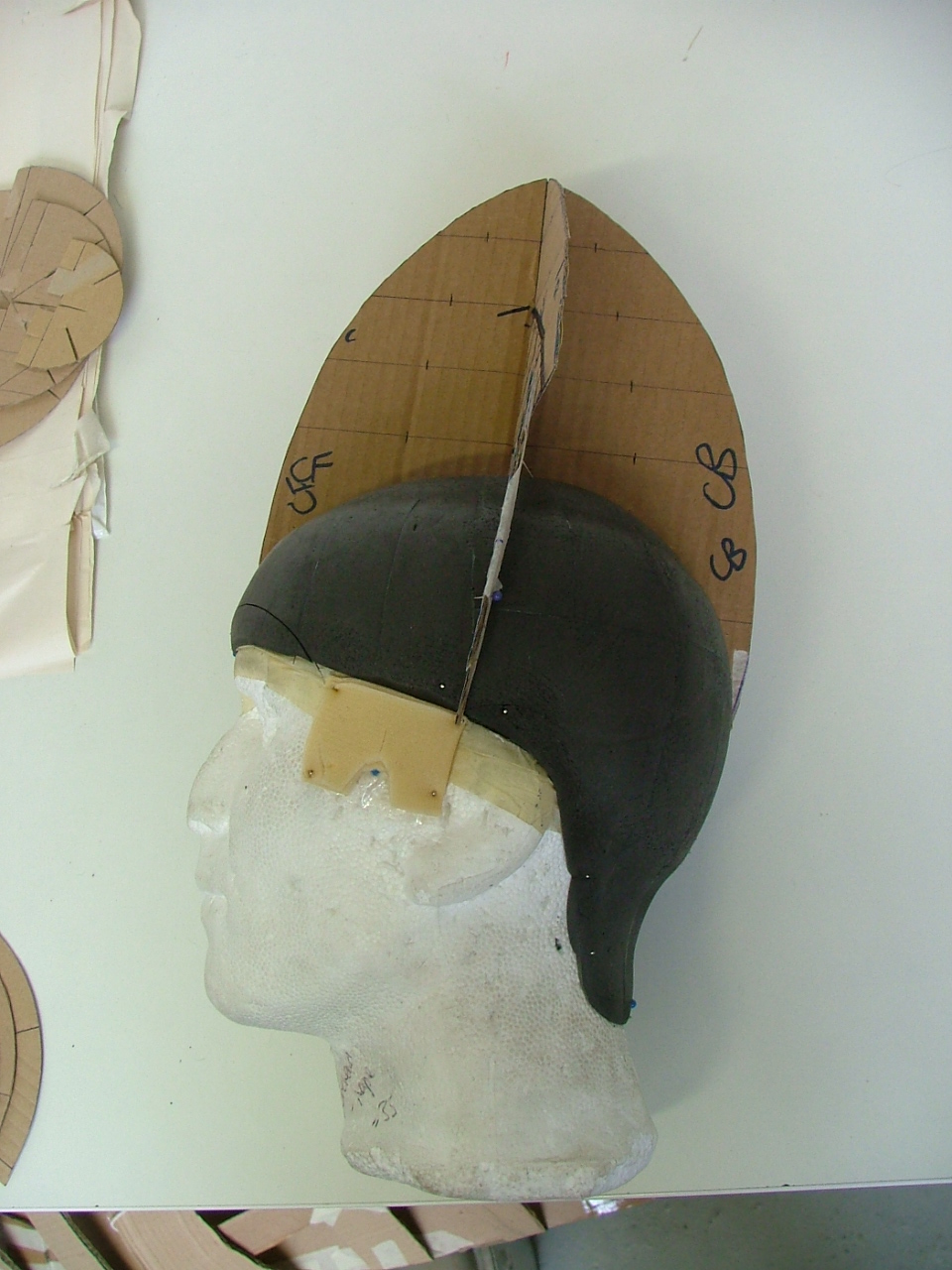 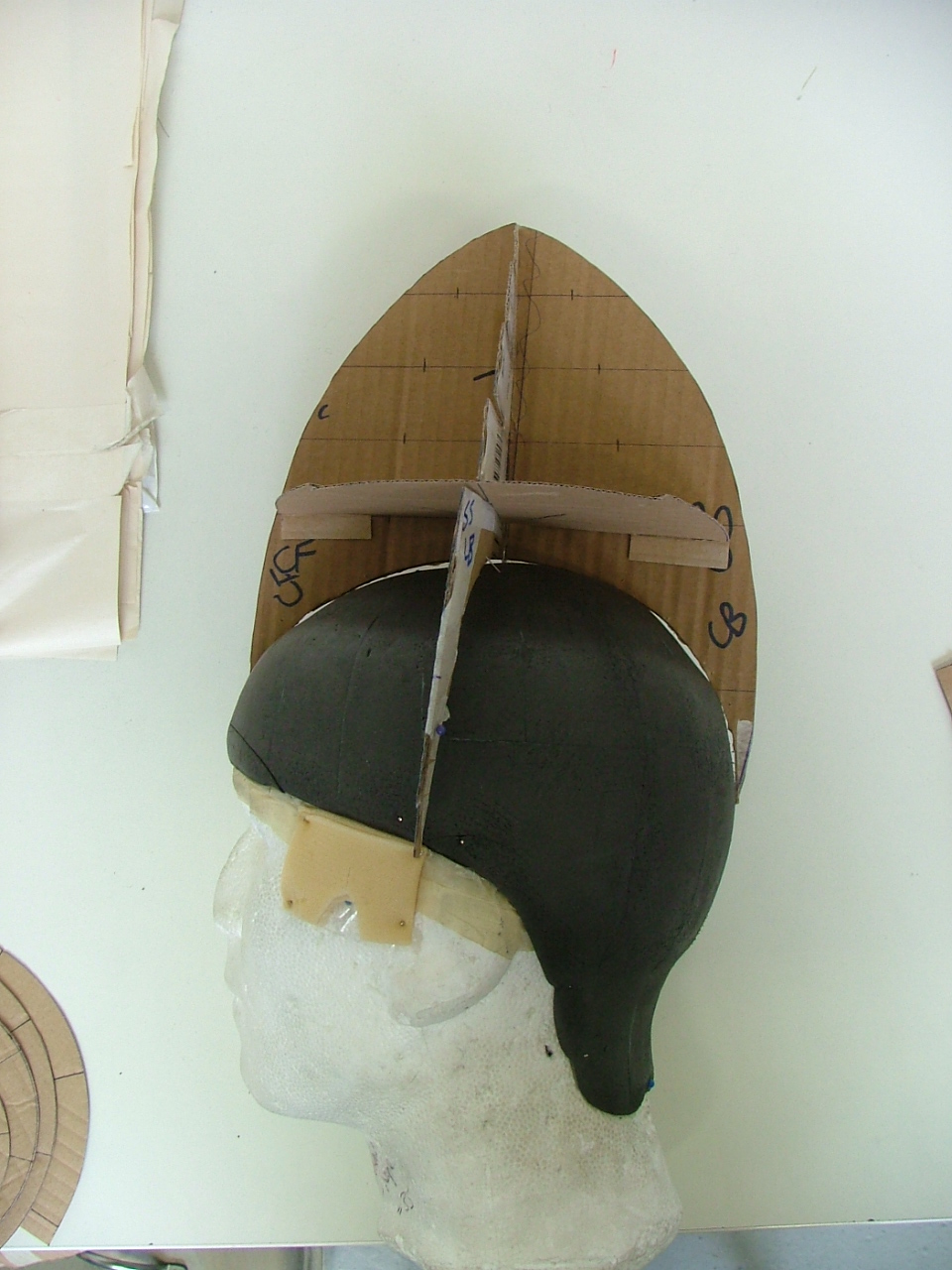 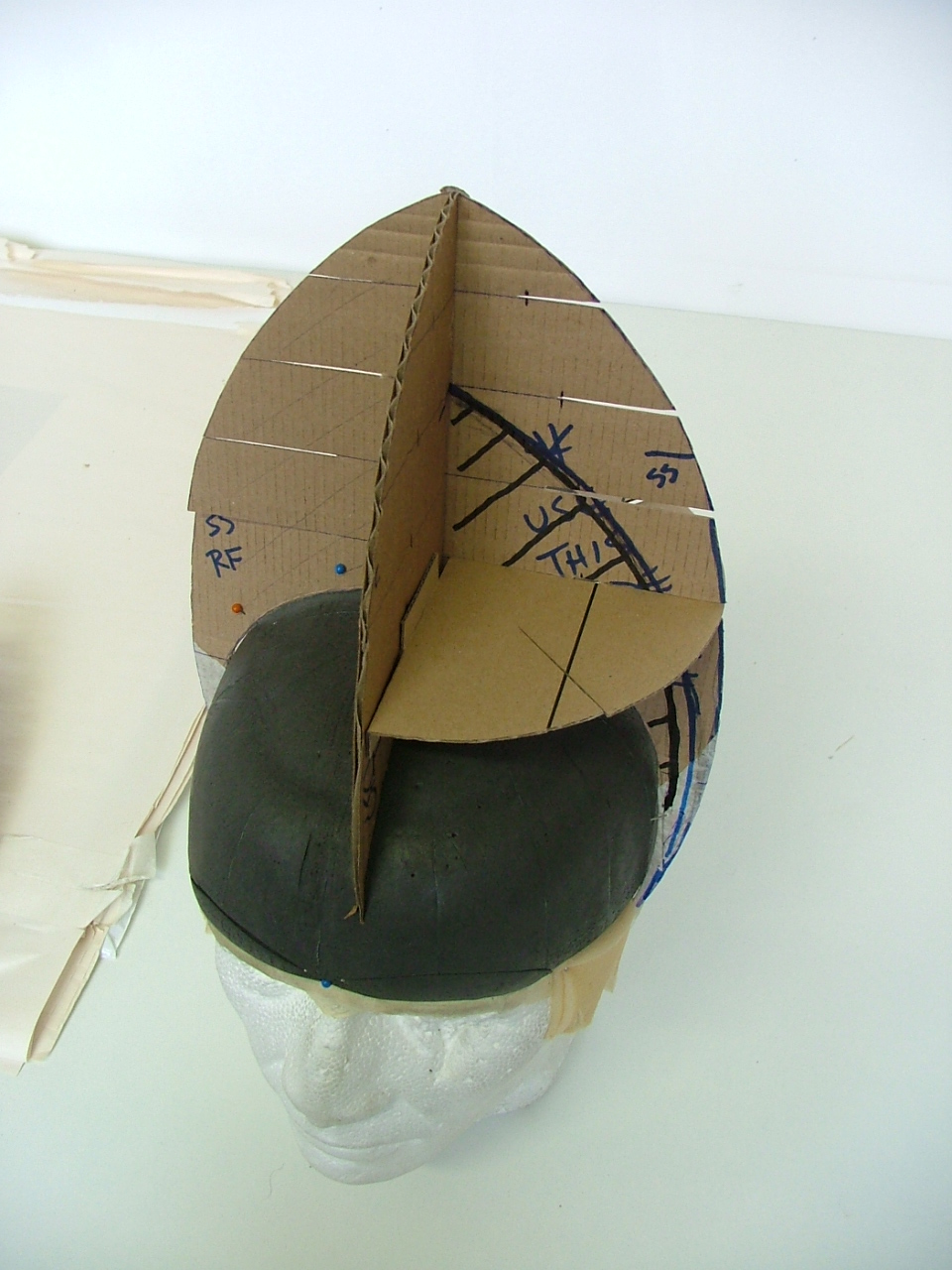 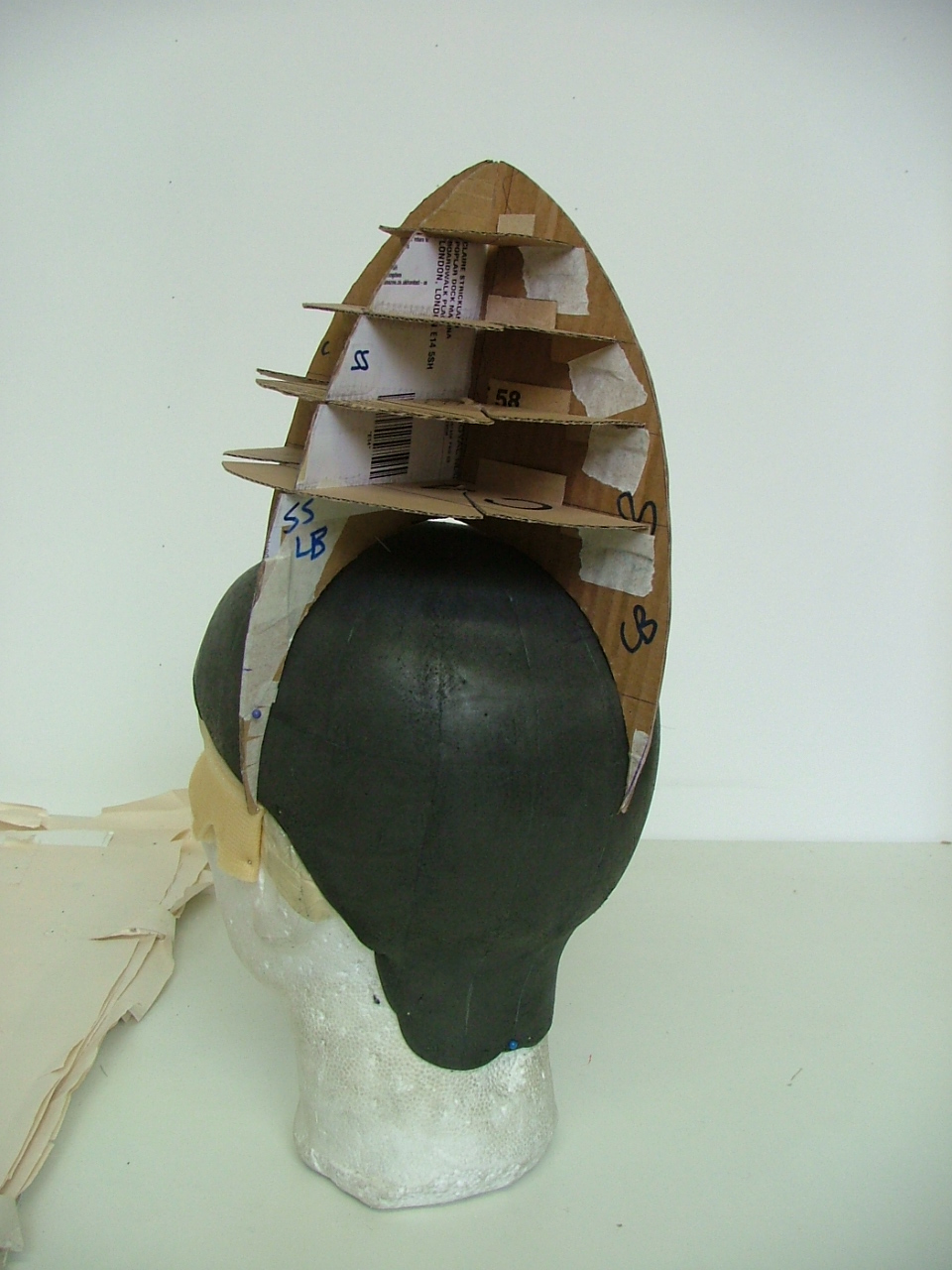 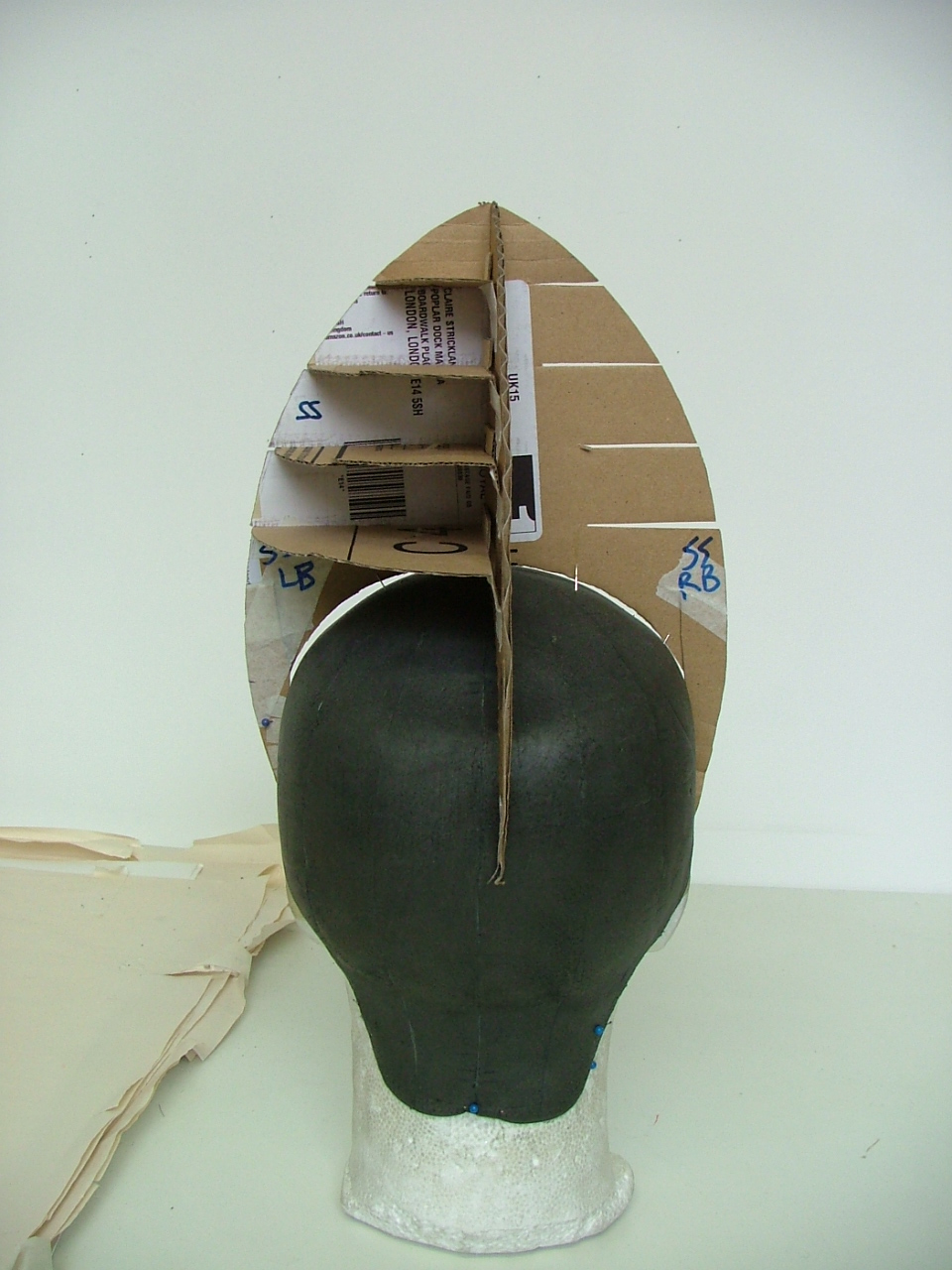 Now for the diagonals. This is easy if it is symmetrical.  If it’s not then I would measure the braces to work out the diagonal view.  The diagonals are still eventually slotting into the same centre line of the whole cardboard former.  Therefore the braces are on the same point of the centre line as they are for the front on view and the profile view.

As long as everything has been marked accurately and the braces are marked at right angles, they should slot in easily.  Cut slots along the 45 degree lines on the braces you have already taped in.  Cut them from the outside of the brace shape to half way along. 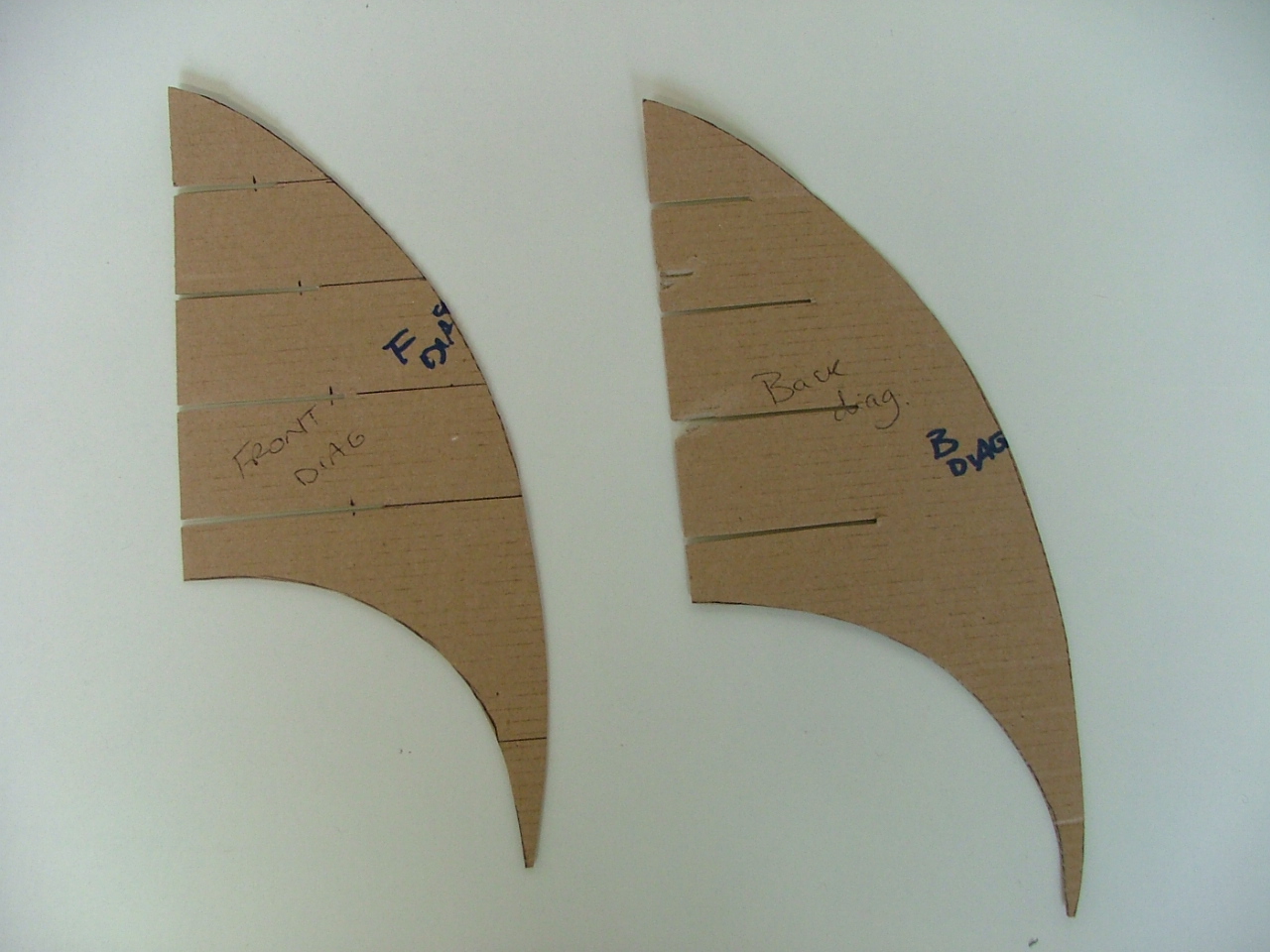 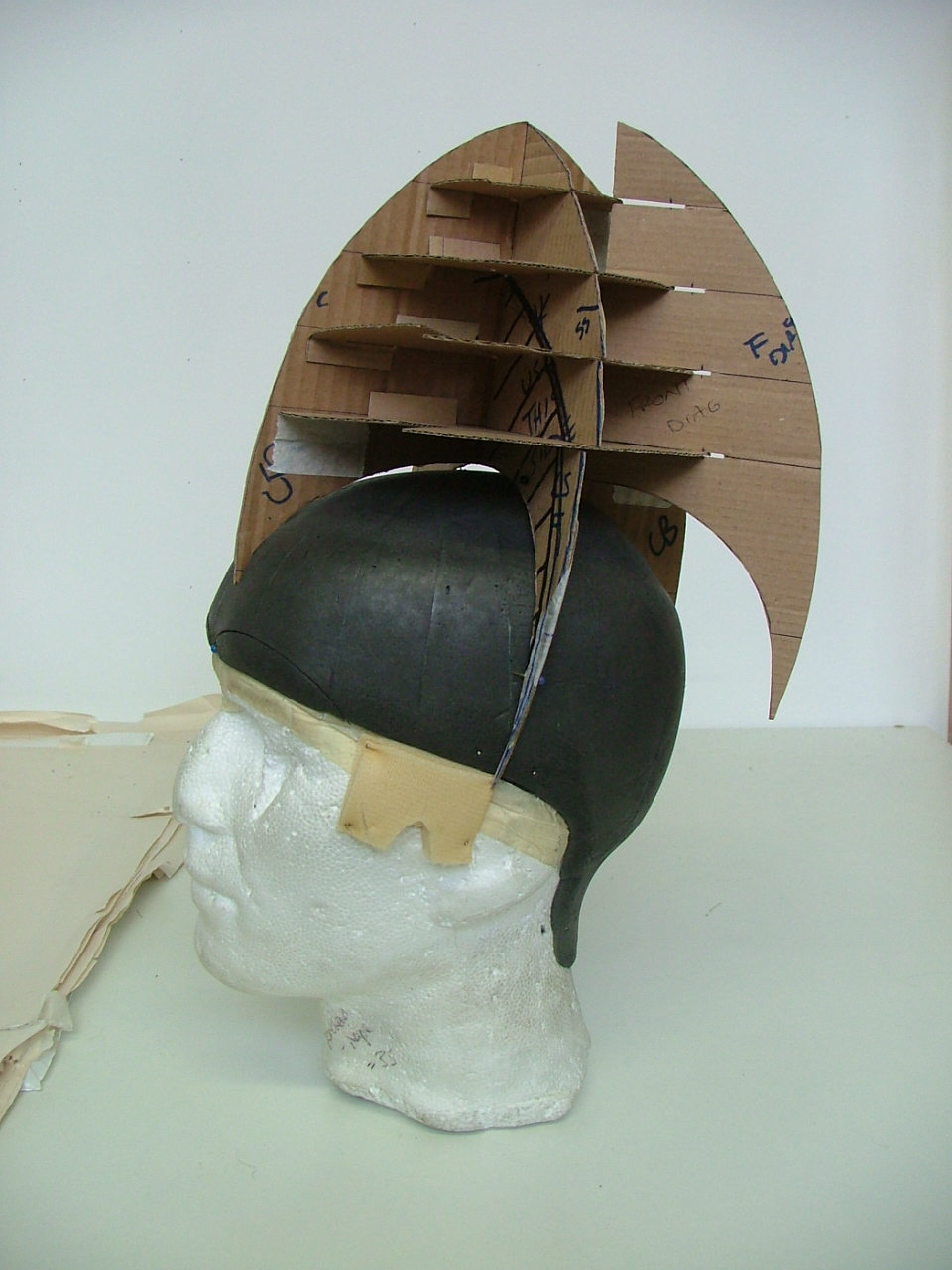 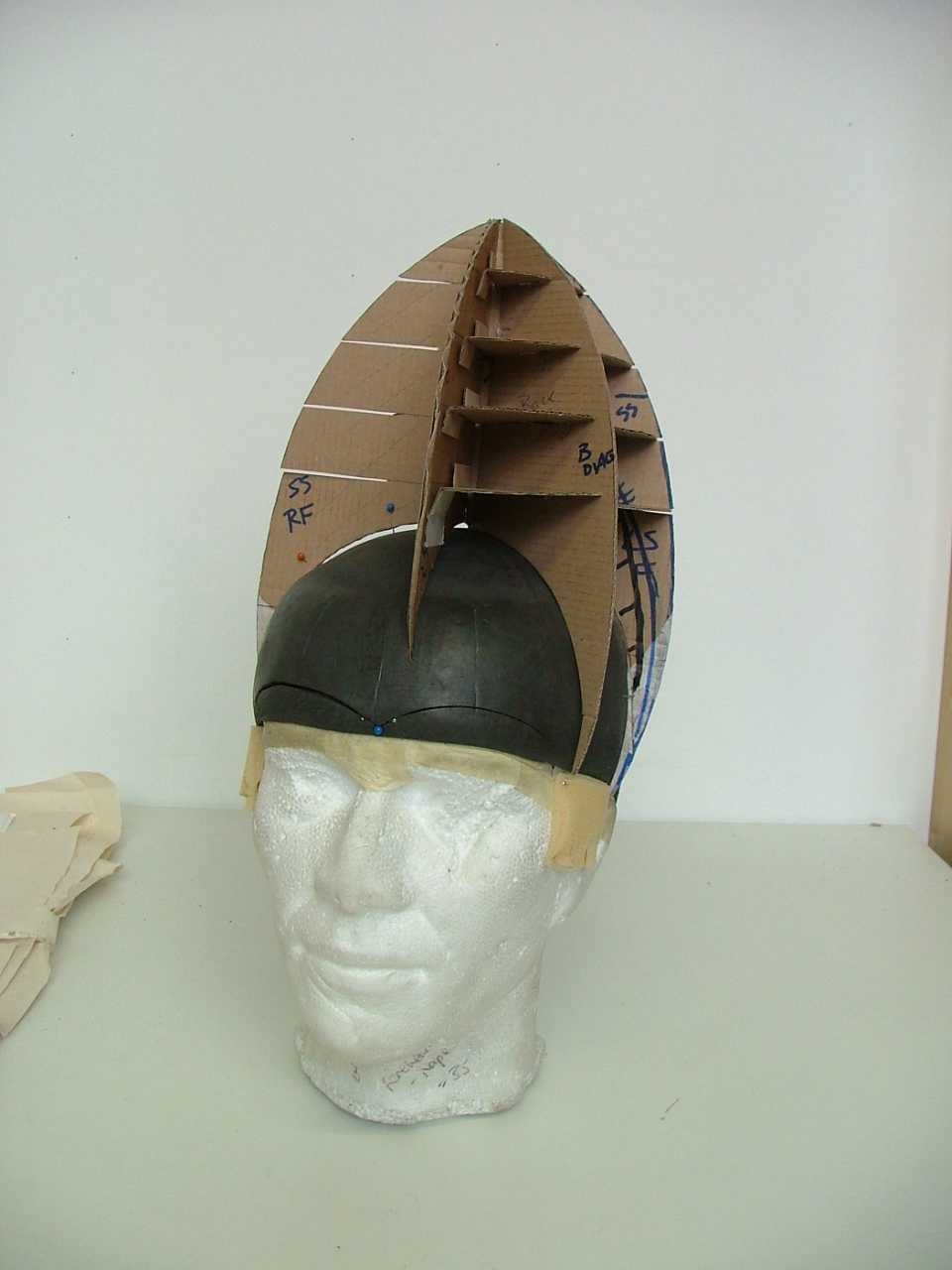 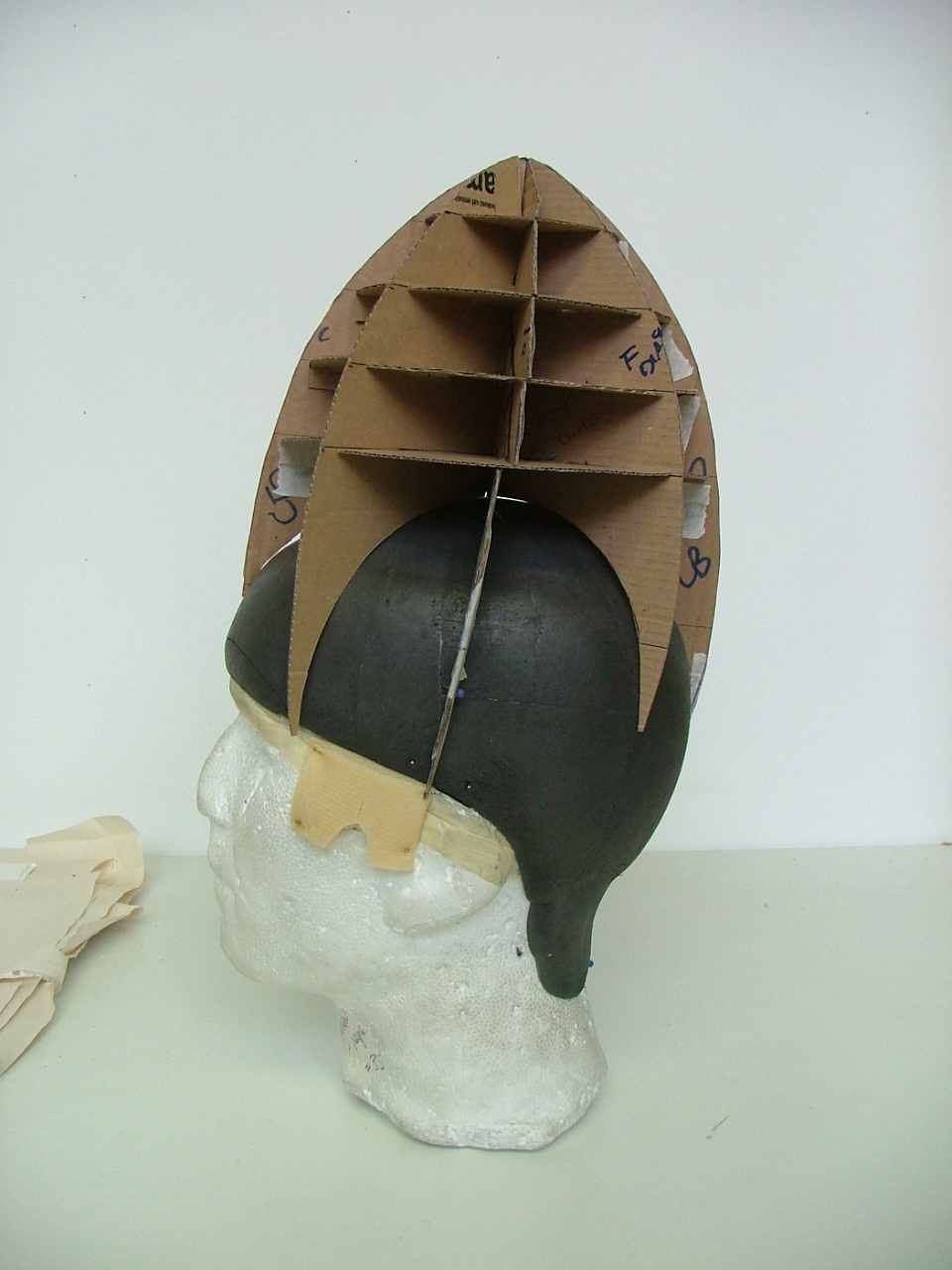 Ta daa!  Please let me know if you find easier ways to do things or realize something interesting about making it which I haven’t picked up on.   You can buy polystyrene heads from Charlie’s shop fitters on Commercial Road, Aldgate East tube – about £4.50 for a female head and £6 ( I think) for a male head (male heads are closer to a realistic human head size).