All about millinery felt – how is it made, how is it different to ‘normal’ felt

Nov 16, 2017 | 'How To' guides and tutorials on how to make and design hats and headdresses and work with millinery materials | 11 comments 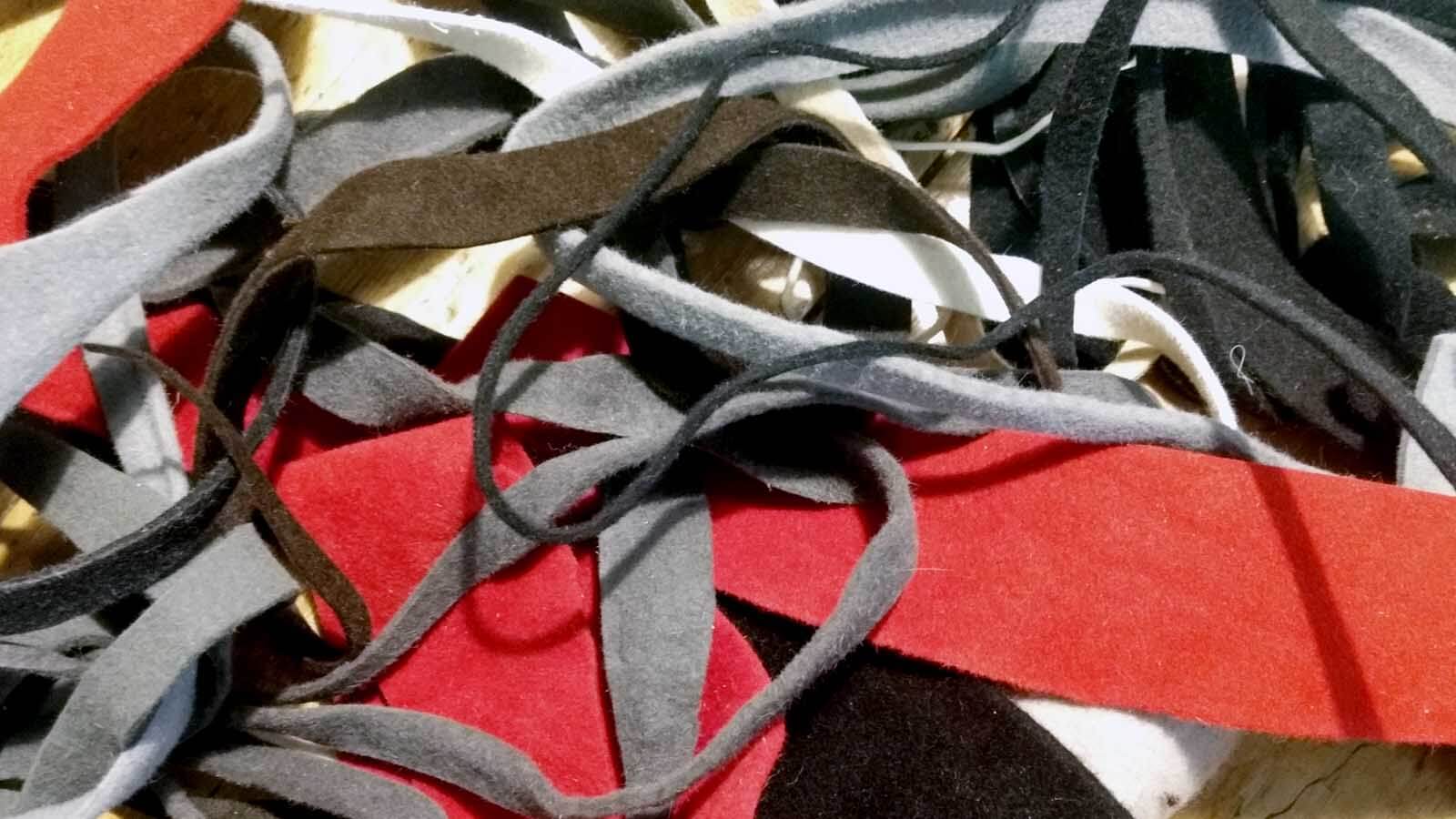 ‘Normal’ felt is flat. If you try to use this flat felt to block a 3D shape – like a standard domed crown – it will have to have a seam.  It might also rip and get a hole in it as it is usually quite thin. And modern day craft felt is also very likely to be synthetic or have a mix of synthetic in it. It will never have the same look and feel as a hat body made specifically for millinery.

Hat making felt is sold as already in a rounded hat shape. There are quite a few different shapes you can buy from factories that make hat bodies, but as a beginner you will probably either buy it as a cone or a capeline.  When you are looking for what to buy you need to know 2 things: 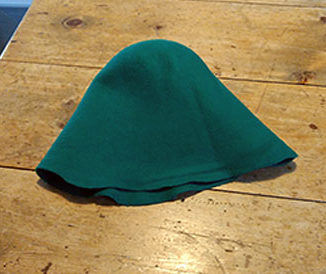 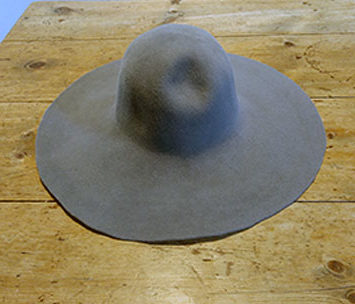 Felt is one of the oldest, if not the oldest material used for making hats.  When you think of Guy Fawkes and see those tall crowned hats, they are made from felt.  Below is a great film from the Torb and Reiner YouTube channel, where they describe some of the differences between different millinery felt hat bodies.

A plain furfelt.  I bought this from Kopka in Germany.  A thinner felt than a peachbloom and a lovely matt quality.  A good option for making vintage looking hats.  I have not found a UK supplier of plain furfelt, and have been told by a large UK supplier that it doesn’t exist (not true!)  If you want even thinner felt, which is perfect for draping and flower making, then you can buy ’tissue’ felt, also from Kopka in Germany. 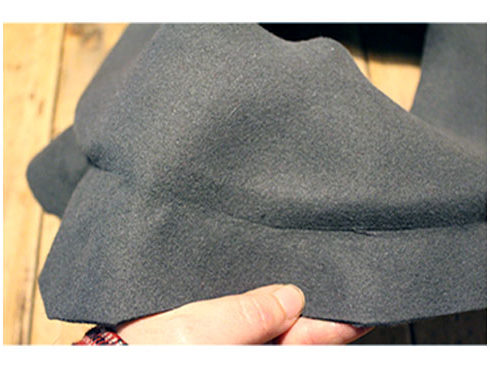 Plain furfelt (have not found a supplier in the UK)

A peachbloom or velour felt.  When you buy it they will normally ask if you want a single sided or double sided peachbloom. That means do you want the slightly fuzzy surface on both sides or just on the top (double sided is more expensive).  Yes, this is made from rabbit fur.  It is most likely if you buy this in the UK to come from a large felt producer in the Czech Republic called Tonak.  The rabbit fur is a by product of the meat industry.  Furfelt is much easier to block and has a softer look to blocked wool felt. 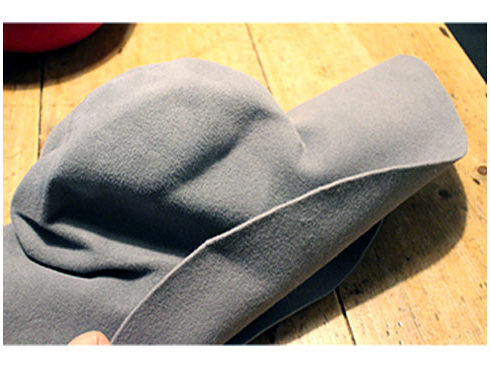 A soleil millinery felt cone, in blue and red.  It is a quality of felt half way between a melusine and a velour peachbloom.  The shiny surface shows up best on dark colours and for this reason the supplier I bought them from (Kopka in Germany) only sells them in jewel colours. 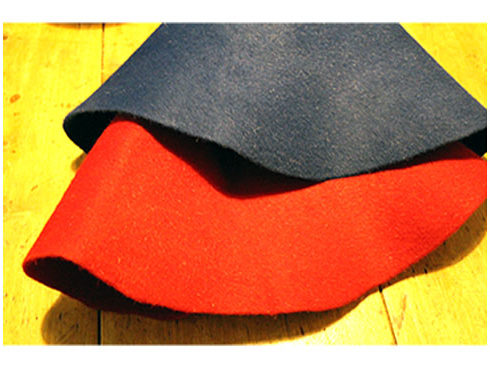 I made this hat from nothing!  I made the felt from raw sheep’s wool whilst on a course with The School of Historical Dress taught by Rachel Frost of the company Crafty Beggars. It took 2 days, 2 days!  If you are interested in buying a hat like this, Rachel is an expert in hats that were made in the days when felt was made entirely by hand with very little machinery http://www.thecraftybeggars.org/hats.htm 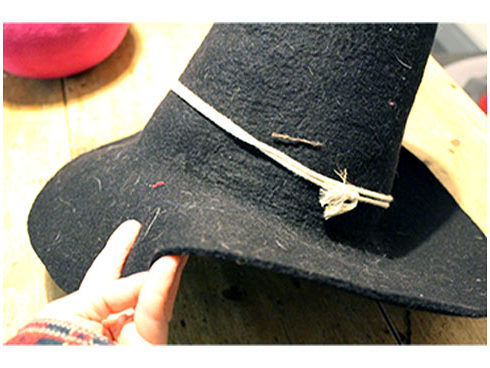 Handmade felt from scratch by me

I bought this felt by mistake from Kopka and it was impossible to block.  I bought it from the men’s section of the website and it is a very thick hood that is designed to be blocked by machines in a factory.  ‘Melange’ means the way the colour is made up of different coloured fibres mixed together to create the colour, rather than a dyed flat colour. 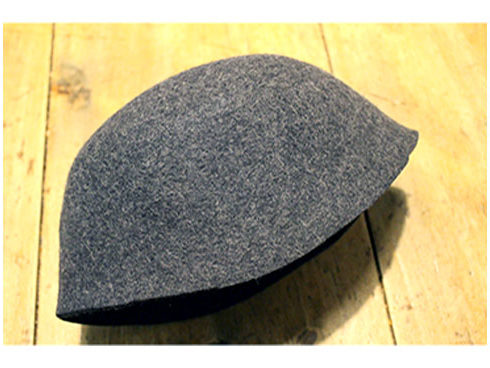 A melusine felt in hunter green.  These are getting to be pretty expensive these days!  You can create a nice recreation of a plush silk vintage top hat with this type of felt.  After blocking you steam, brush and polish it and you get a lovely shine. 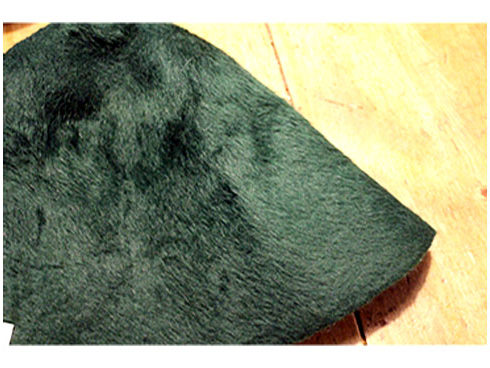 2 wool felt cones, blocked on top of each other over a rounded crown to bring up the size of the crown to my client’s headsize.  Wool felt is cheaper than furfelt, and you can buy it in a range of bright colours. There seem to be quite a few suppliers selling from Poland on Ebay, and most millinery suppliers will stock woolfelt, so shop around.

These types of hoods will not have the same finished appearance as furfelt.  They are also more likely to shrink.  When you are blocking them make sure you leave them for an extra amount of time on the block, to make sure that the felt is 100% dry before you remove them.

They are perfect to use for blocking skull caps to go under wigs or sculptural creations for carnival, showgirl, opera and pantomime. Get one in a colour that matches your creation, plus 1 meter of 1cm wide petersham to bind the edge. 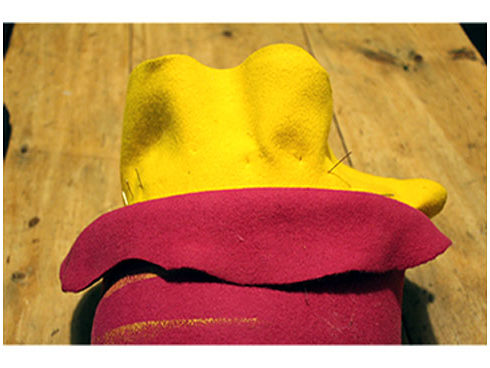 How do they make the felt hat bodies??

I’ve been making hats for over 10 years. I knew a lot of labour went into making the hat bodies (the ‘hoods’, ‘cones’ and ‘capelines’) but seeing how much work goes into them from watching this film just blew me away.  (Also, the health and safety person inside me wishes they were all wearing dust masks!!!)

Below is a film of a modern day felt making factory.  If you compare this one to the black and white film at the bottom of this blog post you will see that the machines are pretty much the same.

Similar to the film above, here is a film of modern felt cones and capelines being made.  This one has a bit more information at certain points (like they get rid of the longer hairs in the felt, as the shorter hairs make better quality felt).  Also, I like this film because you see some great hat making processes for making the finished hat. (Look for the heavy sand bags that are lowered down on top of the hats to press down the brims).

Below is another film of a hat being made from start to finish. It is from around the 1930s I think.  At this time they probably would have still been using mercury as part of the process, something which poisoned many hatters, they had the ‘danbury shakes’ and were ‘mad as a hatter’.  Mercury was used as part of the felt making process called carroting (so called because it turned the felt fibres more orange). You can find out more in this Wikipedia article https://en.wikipedia.org/wiki/Erethism

You see at one point in the film a man working the felt with his hands.  It says 2 hours to felt 3 hoods.  That’s 2 hours of working with bare skin against some very toxic chemicals.  If you are using vintage materials, think about what has gone into making them (this also applies to buying vintage feathers).

One of the most amazing parts for me was at around 8 minutes.  You see a Steson being hand blocked around a crown block.  The men pull out the brims by hand, a brilliant thing to watch, so skilled.